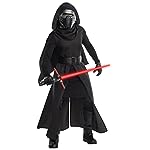 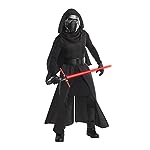 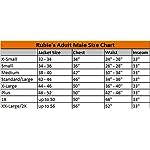 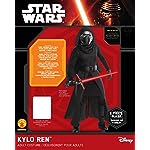 Imagine wielding a power so intense, that you could use it to see inside the minds of your enemies. Imagine being able to change the fate of an entire galaxy with nothing but your own connection to the Force and your own lightsaber. What would you do with that kind of power? Would you follow Luke Skywalker and help him form a new order of Jedi Knights, or would you rebel and use it to bend the entire galaxy to your will? That’s the dilemma facing Kylo Ren faces in Star Wars: The Force Awakens, and quite frankly, it’s not the kind of thing that you can take lightly, but there is one choice that can be easy for him. For the question of what kind of outfit to wear, the answer goes to this Grand Heritage Kylo Ren Fancy dress costume.

This high quality Kylo Ren fancy dress costume recreates the outfit worn by Adam Driver in Star Wars Episode VII. It comes with the jet black cloak and robes of the maniacal villain, ensuring that you look like a terrifying threat to the entire galaxy when you put it on. The mask also provides the intimidating look that was inspired by Darth Vader. Of course, this deluxe fancy dress costume doesn’t come with Force powers, a volatile attitude or sweet lightsaber training, so you’ll need to take a few lessons on both of those on your own. (You’d better start finding a way to track down Supreme Leader Snoke if you want to learn some of that stuff.) – Robe – Hooded Cape – Belt – Pants w/ Attached Boot Tops – Pair of Gloves – Mask
Umhang mit Kapuze, Umhang mit angenähter Schürze, bloves, Gürtel mit geformten Schnalle, Hosen mit angenähten Gamaschen und 2 Stück Maske
RUBIE ‘S offiziell lizenziert Produkt getestet, um EU-Verordnungen
Entworfen in uns